You are here: Home / Travel / Golden Country: If history is your thing, there’s plenty of it to see in this region

Historic Hat Creek Ranch, near Cache Creek, is one of the few surviving examples of the roadhouses which were spread along the Cariboo Wagon Road, and has been beautifully restored and preserved.

The Packing House in Spences Bridge is now a popular restaurant, but it started life more than 100 years ago as exactly what the name says: a packing house for the fruit (mainly apples) produced by Jessie Smith, better known as Widow Smith of Spences Bridge, whose apples were specifically requested by King Edward VII of England at the Royal Horticultural Fair in London.

The apples from Mrs. Smith’s orchards were carefully graded and sorted, with any long stems trimmed so they would not cause bruising (one bruised apple could ruin an entire box); then each apple was carefully wrapped in cotton batting and placed in a wooden packing box, for shipment all over the world. Today, diners can enjoy a delicious meal or snack inside a unique piece of BC’s history.

The Clinton Museum was built in 1892 of local brick which was provided by a short-lived business in the area, and is the only surviving brick building in the town.

Originally a schoolhouse, it was also used as a courtroom when need arose (with school cancelled when court was in session). It became a museum in 1956, and houses a large collection of artifacts and documents, records and photographs, about Clinton and the surrounding area going back to the Gold Rush days. Further exhibits are in the former livery stable behind the museum, and there are also numerous historic wooden vehicles on the museum grounds. The roadhouse at Historic Hat Creek — pictured in this undated photo — sits directly beside one of the remaining stretches of the 1862 Cariboo Waggon Road, and has been completely restored for visitors to enjoy. (Photo credit: Historic Hat Creek)

Historic Hat Creek almost certainly needs no introduction. It’s one of the few surviving examples of the roadhouses which were spread along the Cariboo Wagon Road, providing food, drink, and accommodation (for people and their horses), and has been beautifully restored and preserved.

Stepping into the roadhouse, where interpreters in period costume regale you with stories of the property and some of the larger-than-life people who lived there, is like stepping back into the 1860s. Once you’ve toured the roadhouse, take a tour of the grounds, which contain other historic buildings, including a blacksmith shop, where you can watch the smithy at work (and maybe try your hand at pounding a horseshoe). Keep an eye out for the resident chickens, pigs and sheep. 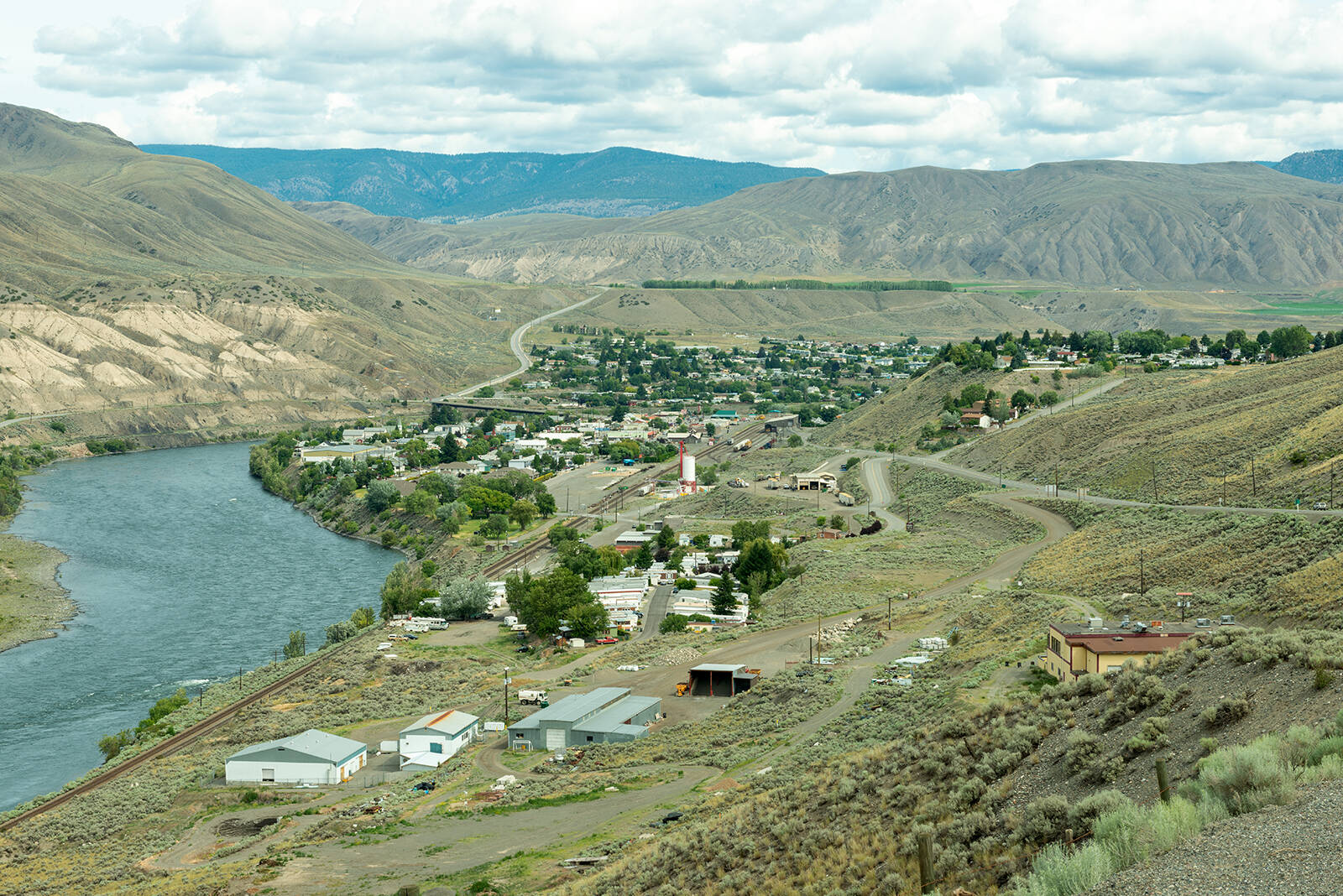 At the museum in Ashcroft, BC, constructed in 1917, walk through the fascinating history of this town along the Thompson River.

Detour into Ashcroft and visit the museum, constructed in 1917 as a public building which originally housed the post office, telegraph office, Customs agent and telephone exchange. Fascinating exhibits allow you to walk through Ashcroft’s past – don’t miss the mining display on the second floor.

The historic Chinese cemetery to the east of town beside Highway 97C has been lovingly restored, and now contains beautiful glass mosaics, an altar and decorative headstones on the graves of those buried there. A large display board describes Ashcroft’s once-thriving Chinatown and the importance of Chinese immigrants to the province and area.

Ancient burial sites and preserved cave paintings are at the summit of Savona Mountain, which overlooks Kamloops Lake. The caves were not used for burials; the Secwepemc people believed that harmful spirits known as “land mysteries” lived in them. However, remains of burial sites in more open land are evident on the side of the mountain near the summit. The cave paintings were made by “the people of long ago” and are painted in red, the colour of life, good luck, and virtue.

Scattered throughout the area are the features known by First Nations people as “coyote rocks.” The most well-known one is probably the “Balancing Rock” between the top of Six Mile Hill and Savona, to the north of Highway 1. These columns or pillars with a rock balanced atop them are formed when a “cap” rock of hard material sits on top of softer sedimentary rock and silt, which gradually erodes, leaving the harder material perched on top.

According to Secwepemc legend, these markers were created long ago by the Old One (Creator) and his main assistant, Coyote, to mark Secwepemc territory.

The Soldiers Memorial Hall in Walhachin was constructed in 1912, and while it was used as a fruit packing house it also served a more vital function to the town’s residents: a central place for entertainment in the community. Walhachin was becoming known at that time for its large gatherings, and the hall – with its spruce-planked floating dance floor set on springs – was very popular with residents and guests.

The name was bestowed on the hall after World War I, which saw 97 of the 117 men living in Walhachin at the time enlist; few of them returned. A cenotaph behind the hall now commemorates these men, and the hall itself contains a museum which explores the short but eventful life of Walhachin, the not-quite-ghost-town.

By Car from Vancouver: Spences Bridge is about a 3.5-hour drive along Highway 1. About 30 minutes north of Spences Bridge, turn right at Cornwall Road toward Ashcroft, or continue north to Cache Creek before the Trans Canada turns east toward Walhachin and Savona.

By Car from Kamloops: The town of Savona is located about 40 minutes west of Kamloops. Head south along Tunkwa Lake Road to access Mt. Savona Provincial Park, or continue west to Walhachin and Cache Creek.

END_OF_DOCUMENT_TOKEN_TO_BE_REPLACED

CrabFest returns to Port Angeles Oct. 8 to 10
Next Post: Why wait for winter? Ski season starts this fall!